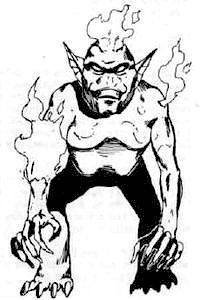 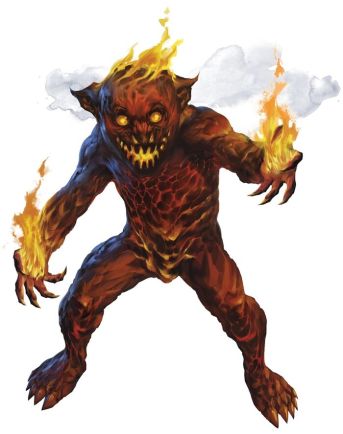 Welcome back Dungeoneers! It’s been some time, but after a much needed break I am ready to get back into action with our little friend the Magmin. They are small fire elementals that are hell bent on burning all around them. They usually call the Plane of Fire home, but are often summoned by spellcasters into the Material Plane to do some sort of bidding. They’re usually tasked with wreaking havoc on an unsuspecting town or village or perhaps even causing a distraction in a nobleman’s home. Luckily they are somewhat easy to handle. They have an extremely low amount of health and they’re not that difficult to hit. However they can cause more harm than they let on.

Their only form of attack is to touch an enemy with their enflamed hand causing moderate fire damage, but afterwards the enemy ignites and has to spend an action putting out the fire or take further damage every turn the fire persists. Their biggest “defense” is when they are killed they unleash a burst of fire death and everything within 10 feet of the explosion takes some good damage. All in all the Magmin is a fantastic, and irritating enemy for early level campaigns.

I like the idea of a gaggle of Magmin’s being summoned into a king’s castle to act as a distraction while a group of thieves breaks into a treasure vault. Can you imagine a big ass group of these fully surrounding your players and then when one goes off it sets a chain reaction that kills the others while also doing massive damage to the players. That’ll certainly put things into perspective.

Thanks for reading Dungeoneers, I hope you enjoyed this new installment. If you liked what you read please consider donating to my ko-fi! Till next time.

One thought on “Monster Mania: Magmin”