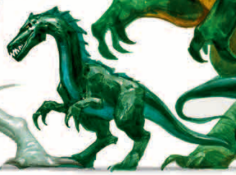 Dragons have a lot of influence in this game we all love, obviously since half of the name involves them, and I’m a huge fan of when they affect the world they inhabit because it usually involves some huge cataclysmic event that destroys life as we know it. Guard Drakes are one of the few instances where a Dragon creates life rather than takes it. Guard Drakes are created through a dangerous ritual and a gift of dragon scales. Once the ritual is completed a large egg is produced and within hours the Drake is born. The time span between when they hatch and their maturity is also incredibly fast, about two to three weeks, which is an interesting contrast to how long Dragons take to grow and achieve higher levels of power.

As Drakes are growing they are typically and behave almost identically to a guard dog. They are obedient and loyal to the first person that feeds them and will protect their parent with ferocity rivaling their namesake. As they are in the 5e they are somewhat lackluster in their battle prowess. While they are able to do two attacks on their turn, their damage is negligible and their armor class is even more so. They can certainly be intimidating at first but any competent adventuring party should be able to dispatch them with some amount of ease. Personally I would have liked to see more variety in Guard Drakes. Currently there are one for each Chromatic Dragon, but I would have loved to see some metallic counterparts. or maybe versions that had some powers passed down from the Dragon parent such as a breath weapon or the ability to fly.

To me Guard Drake’s have a lot more potential to be not only more dangerous enemies, but very powerful allies especially for smaller parties. I think someday soon I’ll have to tackle this particular discrepancy and make a whole new type of Drake that personifies the legacy of a Dragon.

Thanks for reading Dungeoneers, I hope you enjoyed this new installment. If you liked what you read please consider donating to my ko-fi! Till next time.